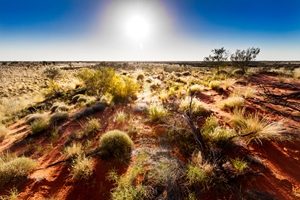 Australia could face dry conditions for years to come

It's the time of the year when the stifling summer weather rears its head across Australia. But even worse could be on the way in the not too distant future.

Following one of the hottest annual periods on record, extreme weather and heatwaves in particular could become a regular fixture across the country in years to come.

Globally, 2014 was the hottest year ever according to a report from the Climate Council. The average temperature around the world increased by 0.69 per cent – eclipsing the previous highs set in 2005 and 2010 respectively.

Furthermore, last year was the 38th consecutive year that saw a rise in average temperature. The Climate Council points to an increase in greenhouse gases primarily from the now ever-present burning of fossil fuels.

The report, prepared by Professor Will Steffen, highlighted the Australian weather as a growing concern, pointing out that the next decade could be critical if temperatures continue to rise at the same rate.

"We are now halfway through the critical decade for action on climate change. To slow and then halt the warming trend, we must cut carbon emissions rapidly and deeply," Professor Steffen explained in the report.

"[In Australia] hot days are happening more often while heatwaves are becoming hotter, longer and more frequent," he continued.

If action isn't taken, the extreme weather – which is particularly detrimental to agriculture – will continue to compound the issues that the increases in heat brings with it.

High temperatures and dry conditions can quickly mix to present water shortages. Ensuring that all of the water collected from bores and the appropriate river sources has practical application can help better deal with any shortfalls.

Before using any such water, treating it with a Hydrosmart water conditioner impacts salinity through the use of resonant frequencies – not chemicals – ensuring that you ultimately end up with a more usable resource.