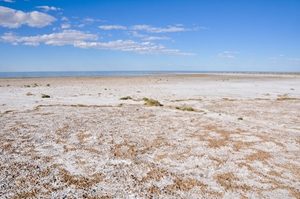 Prolonged above-average temperatures will continue to hit large parts of Western Australia, the latest data from the Bureau of Meteorology (BOM) has revealed.

The severe heat wave conditions will even extend into parts of the Northern Territory in the coming days and weeks.

“A very large, slow moving hot air mass currently situated over inland Western Australia is causing a build up of heat, which has already seen widespread temperatures in the mid-to-high 40s for the Pilbara and Gascoyne regions,” BOM stated in a news release on January 22.

Due to the slow rate at which the weather patterns are shifting, it is now feared that the well above average temperatures will be a fixture for longer than was originally hoped.

The hottest temperature ever recorded in Western Australia at the start of the year was in February 1998 – 50.5 degrees Celsius. The heights of 47.8 degrees Celsius have already been hit in the town of Carnarvon, so the overall record may indeed be usurped if the hot conditions continue as predicted.

The high temperatures are causing havoc for agriculture in the region – with banana growers having to deal with ongoing issues. Western Australia also houses around 15 million sheep and lambs as well as close to 2 million cattle, according to figures from the Australian Bureau of Statistics.

Keeping crops and livestock in only the best of health is crucial across the region, as agriculture is one of the main income sources for the state.

Heat wave conditions highlight the need to better utilise any applicable water sources, as supply can often become limited. Utilising a Hydrosmart water conditioner is the ideal solution to do just that.

Using resonant frequencies, the system can unlock the bio-available nutrients in water, ultimately making it more suitable for use in agriculture. Furthermore, waste is kept to an absolute minimum, meaning that any dwindling water supplies can be used to their full potential.