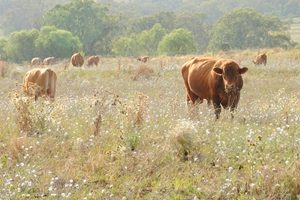 Farmers in Far North Queensland are struggling to keep cattle healthy, as drought conditions make it difficult to sustain the crops needed to feed livestock.

A slow start to what was supposed to form part of the wet season has meant that this will be the third year in a row that the lack of sustainable water source has posed a problem.

It is now feared that the health of some of the cattle at the aptly named Karma Waters Station could be placed in jeopardy.

“Governments are saying they want to double agricultural production across Northern Australia. I think that’s probably a pipe dream myself but I think to do that, there’s a need for an awful lot of government infrastructure to go in,” explained Alan Pedersen of Karma Waters Station in an interview with the Cairns Post.

Agriculture is one of the main contributors to the economy of Queensland and ultimately the wider country. According to census data from the Australian Bureau of Statistics, there are nearly 30,000 farms across the state taking up over 81 per cent of the total land area.

Cattle farming in particular is a big focus, with the total head count stretching to over 12 million. Subsequently, battling the drought conditions is crucial for farmers.

“I personally don’t believe in subsidies, I think they help bad management. I think [farmers] need to build their own resilience,” concluded Mr Pedersen.

To that end, installing a Hydrosmart water conditioner can help those in agriculture better manage any precious water supplies.

Through the use of resonant frequencies, the bio-available nutrients are unlocked, ultimately meaning that the water can better support crop growth. Furthermore, the system keeps waste to an absolute minimum, meaning that is perfect for use in conditions in which every last drop needs to be savoured.