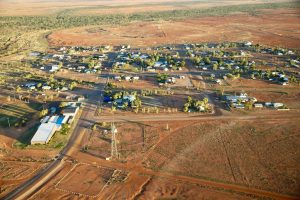 With mining towns often located far from civilisation, providing quality water for residents can be a challenge.

In some instances the solution might be to use groundwater, though companies face high costs when replacing pipework and infrastructure due to scale.

Hydrosmart is a physical water treatment system that breaks the bonds between minerals in solution and progressively unblocks pipes and infrastructure using resonance frequencies.

Non-ferrous pipe sections wrapped with coils are placed into an existing system, and a computer controlling the coils generates electrical fields which are frequency-modulated with respect to polarity. These pass through the pipe into the mineralised water, breaking mineral bonds and hydrating and dissolving build-up and scale.

“Many companies install Hydrosmart before a town is occupied to act as a scale preventative for the life of the town,” Hydrosmart Managing Director Paul Pearce said.

“Others companies see the need for descaling after changing to a lower-quality water source and then install Hydrosmart as a fix.”

Australia’s three biggest mining companies use the technology in mining towns, with each site housing 50 to 2000 people seasonally, depending on workload and mining operations.

Camps that make use of Hydrosmart quality water, include those at Newman, Port Hedland, West Angelas, Mount Isa and New Guinea. Deployed units go up to 300mm in diameter.

“We had an instance where chemicals were being used for dewatering at a gold mine that handled two megalitres of water in its system per day,” Mr Pearce said.

“The 110mm pipe, which carried a mineral load of 29,000 parts per million, was scaled to a thickness of 15mm. Chemicals weren’t doing the job and scaling was getting worse.

“The supervisor reported installation of a Hydrosmart system not only prevented any additional build-up of scale, but actually removed the existing 15mm of scale such that the pipe was back to a bare black poly pipe.”

Hydrosmart can also be used for minerals processing.

An example is a commercial heap-leach mining operation where crushed heaps were irrigated with a cyanide solution to leach silver into solution.

In practice, this stopped calcium gypsum build-up from forming in the pipes and sprinkler heads during the recovery process. 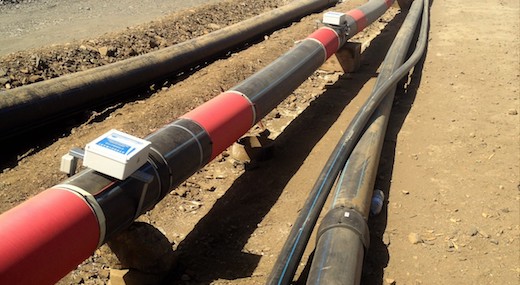 The Hydrosmart system installed to remove scale gypsum at an African gold mine.