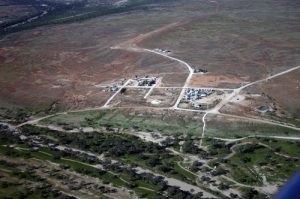 Innamincka Cattle Station is using Hydrosmart on its bore water for cattle to drink.

Nathan Keogh, station manager at Innamincka Station ( see station history below ) fitted a Hydrosmart D60EO in September 2018 onto a problematic bore that supplied above 6,000 ppm salty, hard scale forming water to its stock troughs set up for their 13,552 km2 cattle farm at the top end of SA back in September 2018.
He observed a significant range of outcomes being gradually produced by the maintenance free water conditioner over a 6 months period in the feedback below that he kindly provided to the team at Hydrosmart.

The troughs now have no scale on them and the cattle seem to be going well on it, they tend to walk off this bore and return to others in the paddock even though the feed is ok.
Since installing the system they have remained there.
I have had some tests done and while not reducing TDS it does break the hardness down…

At this point I’m pleased with how it is going cattle seem content there although feed now is getting short and will have to move them on.
I have noticed a definite change in the salt/scale build up in the troughs and now cleaning them is a lot better we used to have to do it with a shovel now it just sweeps clean…..

I do believe that the unit I have here is doing something it has amazed me how it has stopped the salty/calcium on the cattle troughs, and looking the other day seems to have halted the rust somewhat.
Like I said before the troughs are now much softer to clean and my next step is to install a shade over the troughs to see if I can lesson algae growth even more.

A bit of history on the station is as follows:
The cattle baron, Sidney Kidman, bought Innamincka in 1908 from the trustees of the estate of William Campbell. At the time the station ran over 4,000 square miles (10,360 km2) and he immediately sold a mob of 250 bullocks in the Adelaide yards which were much admired for their “breeding and quality”. It is located about 4 kilometres north east of Innamincka and 246 kilometres south east of Birdsville. The station is 13,552 square kilometres and is the second largest station in South Australia after Anna Creek station. Innamincka is currently owned by the pastoral company S.Kidman and Co.

The name of the station is derived from two Aboriginal words meaning your shelter and your home.

www.hydrosmart.com.au as Australian as Kidman’s