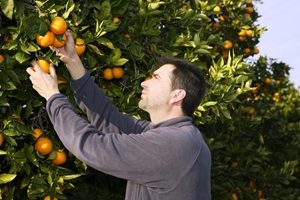 In 2013, the government provided more than 200 growers in the Wide Bay-Burnett region with $5 million of disaster relief assistance after extensive flooding in the area. However, the funding has not stretched far enough for many farmers, as floods were followed by drought and rising salinity in the groundwater.

Gayndah grower Ken Roth spoke to ABC’s Landline on August 17 about how the weather has affected his citrus growth.

“Salinity, like the other things after the flood, it’s definitely made it a lot harder, a lot more stress on people,” he said.

“A lot of trees have got no leaves, very defoliaged on the bottom of the trees through the salt, but long-term it can make deadwood come through the whole tree and that really knocks your quality of fruit around by – deadwood scratches the little fruit and makes it unsaleable.”

The dry conditions have meant that many growers have no choice but to irrigate more, which can increase the effects of salinity in orchards.

According to ABC, the Queensland government has responded to the farmers’ complaints by increasing salinity monitoring around the Burnett catchments. Department of Natural Resources and Mines land services manager Paul Harris explained that the salt has originated from two main sources.

“When you get the big flood events associated with the cyclones like we did in the Burnett you get a flushing through the landscape,” he explained.

“It’s coming from the shallow soils and also through the landscape itself, but you also get a secondary effect – a recharge of the groundwater systems.”

Fortunately, there is a solution for farmers affected by the weather conditions. A Hydrosmart water treatment system can be installed on irrigation infrastructure to leach mineral salts from the soil and allow plants to thrive. This technology is a cost-effective and sustainable solution for ongoing salinity of water sources in the agriculture industry.

Rino and Greta Ozzella are citrus growers at Grancari Estate in the Adelaide Hills, and are long-term users of the system. Greta said, “I think there are three factors to our fruit quality. One is the land, including the soil and climate. Another is the organic methods, and the other is the water we use, which is treated with a Hydrosmart conditioner”