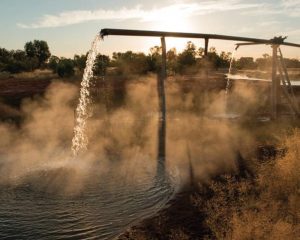 In the past groundwater was regarded as a resource to be mined, much like a mineral resource. It is now, however, generally managed as a renewable resource, recognising that it is recharged from rainfall and discharges from rivers, lakes, the oceans, and through vegetation. Consequently, groundwater management faces many of the same sustainability issues of surface water.

Ecosystems depend on the discharging groundwater, and over-extraction of water can lower water tables or the pressure of water, which impacts upon the dependent ecosystems and on other users. The main problem that arises with water management in Australia is that aquifer recharge rates are notoriously difficult to measure and estimate. In the large aquifers it may take decades for the water table or water pressure response to spread across the whole aquifer.

There are added difficulties of water being hidden below the below the surface and moving slowly so that over-use may take many years to detect. The complex movement and interactions of different layers of water can be hard to detect but they have a direct effect on the sustainable use of the resource, such as by protecting fresh water from being polluted by nearby saline layers. Many water systems are complex and poorly understood, as are their connections to the wider environment. Ultimately, we do not know the full potential of groundwater in Australia even though pressures on the resource are growing.

Figure 1. below provides an outline representation of the variety of aquifers and their productivity across Australia. The most productive aquifers are shown in dark blue and green. 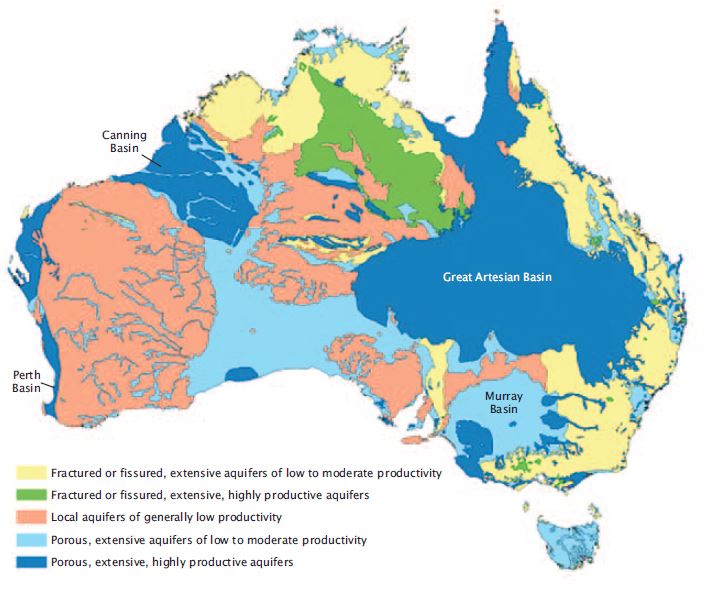 HYDROSMART helps makes use of Groundwater viable for many users.

Hydrosmart uses electrical and magnetic fields to target the charged compounds that are present in solution, and also targets water itself via the water dipole. The result is increased hydration of these compounds and thus bond-breaking in the case of transient bonds between solutes.
Additionally, by opposing bond formation, Hydrosmart maintains substances in a dissolved state for a longer time than they are in the absence of Hydrosmart.
Subsequent application of the technology by crop growers has demonstrated that better dissolved minerals also confer a distinct growth advantage for living organisms.